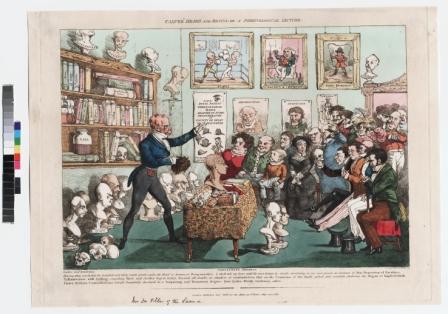 Calves’ Heads and Brains or a Phrenological Lecture 1826.

In the 1800s, phrenology became popular with large numbers of people but soon became controversial within medical circles. Phrenologists believed that the shape and size of various areas of the brain (and therefore the overlying skull) determined personality. This print shows a caricature of a phrenologist who is lecturing to a crowded audience in room filled with plaster heads, books, skulls and pictures. Some of the audience are examining the shape of their own heads. The contents of the shelves include a bottle of Gall. This is a reference to Franz Gall (1758 –1828), a German physician and the founder of phrenology, who had lectured in London in 1823. He had worked with Johann Gaspar Spurzheim (1776-1832), whose plaster cast model head is in the bottom right of the print. The lecturer may be George Combe (1788-1858), an Edinburgh phrenologist who published Elements of Phrenology in 1824. The second edition of the book was attacked in the Edinburgh Review, September 1826. The print is signed by the ‘artists’ “L. Bump” and “J. Lump” – another way of mocking phrenologists.

Paul Feyerabend demonstrated that in reality there are numerous factors that drive the scientific process of any individual. The irrational factors like emotions, passions, politics and individual ability do not allow for any model of an objective unchanging method. And in this Feyerabend is absolutely correct; the evidence falsifies any theory of an objective unchanging method. But Feyerabend takes this to mean that science itself cannot be a rational enterprise. His assertion is based purely on his assumption that Truth and Reason do not exist, and that science therefore has no superiority to any other belief system.